Vellarikka Pachadi / Kerala sadya cucumber pachadi is a delicious curry made with Indian yellow cucumber or winter melon which is slightly tart goes well with the yogurt and coconut combination base.

Vellarikka is the Malayalam name for the Indian yellow cucumber. It is available in many shapes and sizes has a lot of water content. It is much bigger than the salad cucumber in size. It has a tart taste and often used for making curries in Kerala homes.

Vellarikka pachadi is white thick curry made with Indian yellow cucumber, yogurt and coconut as the main ingredients. Coarsely ground mustard and green chili are the only used flavoring usually added. The curry is not boiled after the ground mixture is added. Vellarikka Pachadi is usually served for Kerala sadhya, the traditional feast.

Where is Vellarikka pachadi served on the banana leaf ?

Vellarikka pachadi is served on the top half left side of the leaf after the pickles varieties like instant mango pickle, ginger pickle and lemon pickle . It is one of the traditional 'todu curry' served with rice.Atleast 10-15 such thick curries and stir fries are served on the leaf for the feast. The serving size is a 2-3 tsps only.

Can Vellarikka Pachadi be made on regular days too?

Vellarikka Pachadi is a dish is usually made for Kerala sadya (feast). But it can be made on regular days too.
Whenever I make spicy Kerala dishes with rice I try to mellow down the heat with such yogurt based side dishes.

Make it thick if you are going to serve the pachadi on the banana leaf for sadhya so it would stay in place and pourable consistency if u are making on other days.

Note : Indian yellow cucumber is available in most Indian stores during summer. You may find in the Chinese or other Asian stores too.

Remove skin and the core along with seeds.

How to know if the Vellarikka / Indian yellow cucumber is cooked ?

The cucumber will turn translucent from the opaque white and when you insert a knife into the pieces it will glide through without any resistance.

Make the curry just before serving. It tastes best when had fresh. As it sits the curry can turn tart but very much edible. Refrigerate leftovers. Since most ingredients are almost raw the chance of the curry turning rancid in very high in hot climate even on refrigeration. So do not make ahead !

Other popular recipes to try : 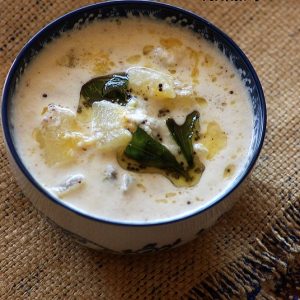 Do give this curry a try and let me know.