When you get your hands on the freshest sweetest Maine lobster and the grocers steam it for you at this time of the year you got to Enoy right! In spite of the short but brutal summer heat lobster season is much awaited here.

Lobster is a very flavorful delicate meat which just needs salt pepper and some melted butter flavoring,my favorite but I love the one with mayo too. My opinion would therefore be do not drown in too much citrus flavors and pickles.

Did you know there are two different types of lobster rolls ?

About the rolls - Lobster shacks make custom made New England style buns and they are really of a good size buttered and toasted on the sides taste exceptional... but I find the buns in the supermarket is not that great hence I chose brioche buns this time. (sorry purist!)

Having a Lobster roll is never complete without the ambiance.

Obviously lobster shack is the place to go and have lobster.Forget the exotic restaurants. Biggest mistake people make is dress up go to a fine dining place and order whole lobster. Remember lobster is altogether a messy affair!

Do not underestimate the power of your sensory organs 🙂 In addition to getting the full on lobster indulgence you need the real full surround sound and sight effects. Sunset,the sea breeze, the cry of the sea gulls, the water lapping sounds and above all the chorus lobster eating ASMR ON EVERY TABLE is an experience in itself, I can vouch that !

What is your second best option?

Having the best of Maine lobster at the comfort of your home makes it the best homemade lobster roll altogether.

Previously made and box office hit lobster dishes to try from here are Lobster Mac and Cheese , Lobster, Artichoke and Spinach Bake 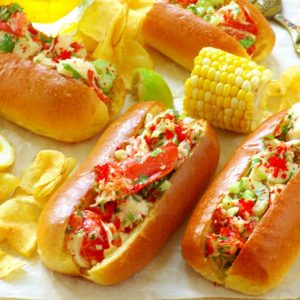 If using New England lobster roll bun then lightly toast the outside of the bun with butter. Brioche bun is your next best option which is not toasted (my personal favorite)

Sides to serve along with lobster roll : These are the sides I especially find in the lobster shacks along New England shores.

The other best options at the same time that sell well are:

Hope you will give the best homemade lobster roll a try and let me know.