Thiruvathira puzhukku is a very traditional Kerala dish made with root vegetables. 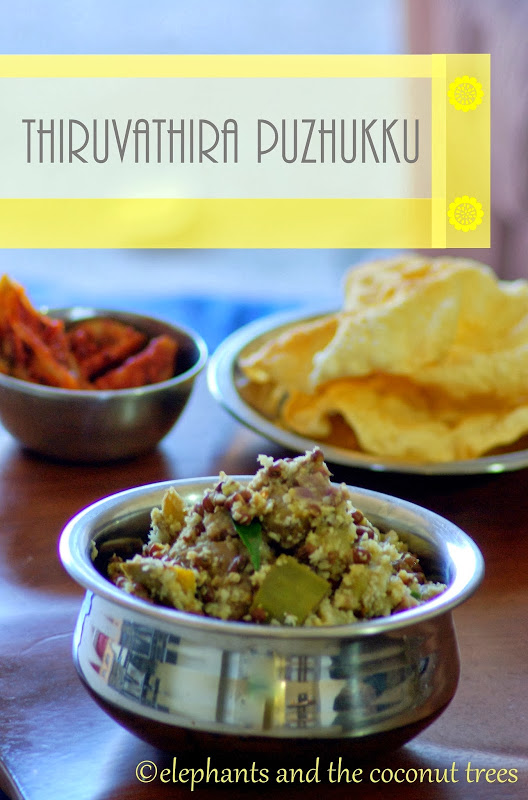 I have been neglecting the very malayalee side of mine in the past few posts so here is  one of my close to heart dish for you and me to cherish some good old memories...

Do you know when this puzhukku is made.. if not read on to know more about our tradition which is practiced even today.
Thiruvathira is a very important centuries old Hindu festival celebrated by mostly Namboothiri and Nair women of Kerala as the birthday of Lord Shiva. It  falls on the full moon day in the malayalam month of Dhanu ( Dec15 to Jan15) on  Thiruvathira nakshatram (star). This year it is on Dec 18.
It is also believed that Goddess Parvathy  met Lord Shiva after her long penance and Lord Shiva finally took her as his life partner on this day check here for more.

Unmarried women observe a partial fast on this day to get an ideal husband and married women take a fast the next day for the well being of their children.The first Thiruvathira for a newly wedded woman is known as Poothiruvathira.
The fast involves abstaining from rice based food. Nurukku Gothambu Kanji, dosa or upma is made along with the puzhukku and a dessert with    arrowroot (koova veragiyathu)  is served. 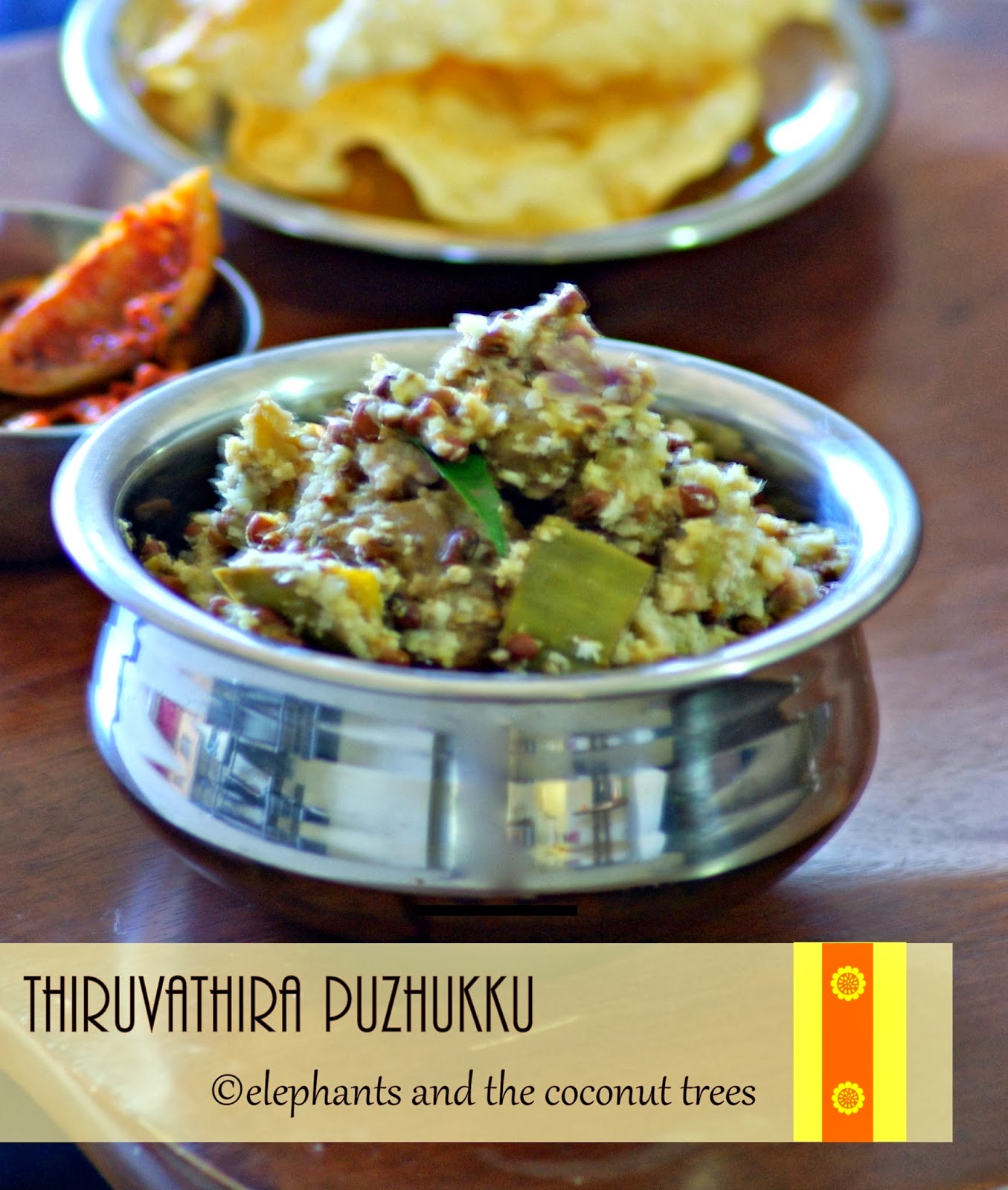 Women wear medicinal flowers dashapushpam (10 flowers) on their hair.This practice is called paathira poo choodal.
Thiruvathira kali( dance) is performed in the evening in real traditional homes with Thiruvathira pattu (songs) sung by women in the family.
For all who have asked me if I do Bollywood dance :))))) this is the only dance we perform Thiruvathira Kali  (there would be a large brass oil lamp lit in the middle instead of the floral bed all the rest would look almost same) Be sure to check out the mansion with an inner court yard those types of homes are called Nalukettu.
It is  very auspicious to visit  Shiva temple during this day. Thiruvairanikulam Mahadev Temple is one of them which opens only for 12 days in a year from Thiruvathira day.

Over to the recipe:
For all those who do not have access to fresh veggies- ratalu (kaachil) and suran(chena) are available in the frozen section in most Indian stores.
I donot add turmeric, potato and yucca(kappa) to make this but if u like u can add that too. Garlic is never used for puzhukku made for Thiruvathira.
Ingredients:
Kaachil / Ratalu - 1 cup
Chena / Suran/ elephant yam - 1 cup
Koorka / Chinese potato - 1 cup
Chembu / Taro root - 1/2 cup
Sweet potato / Sharkara valli kizhangu - 1/2 cup
Van payar / Red chori / Red cow peas - 1/2 cup to 3/4 th cup
Kaya / Raw plantain - 1/2 of 1 large
Salt to taste
Curry leaves- few
Coconut oil - 1 tbsp

Method :
1.Soak van payar overnight and pressure cook it until soft but not mashed.Keep aside.
2. Cut the tubes into large pieces and raw plantain into smaller piece.Pressure cook all of it  for just 1 whistle adding just enough water and little salt.They should retain shape not mashed .(say 3/4 th cooked )
3.Now add the ground paste to the cooked vanpayar and roots mix gently once and cook on medium flame till the raw smell of jeera goes.By now almost all the water would have dried up and it should be semi dry dish.
4 .Switch off flame and add some curry leave (crush with ur fingers) and  drizzle coconut oil level top keep closed until served.Serve warm with broken wheat porridge, broken wheat upma or wheat dosa. 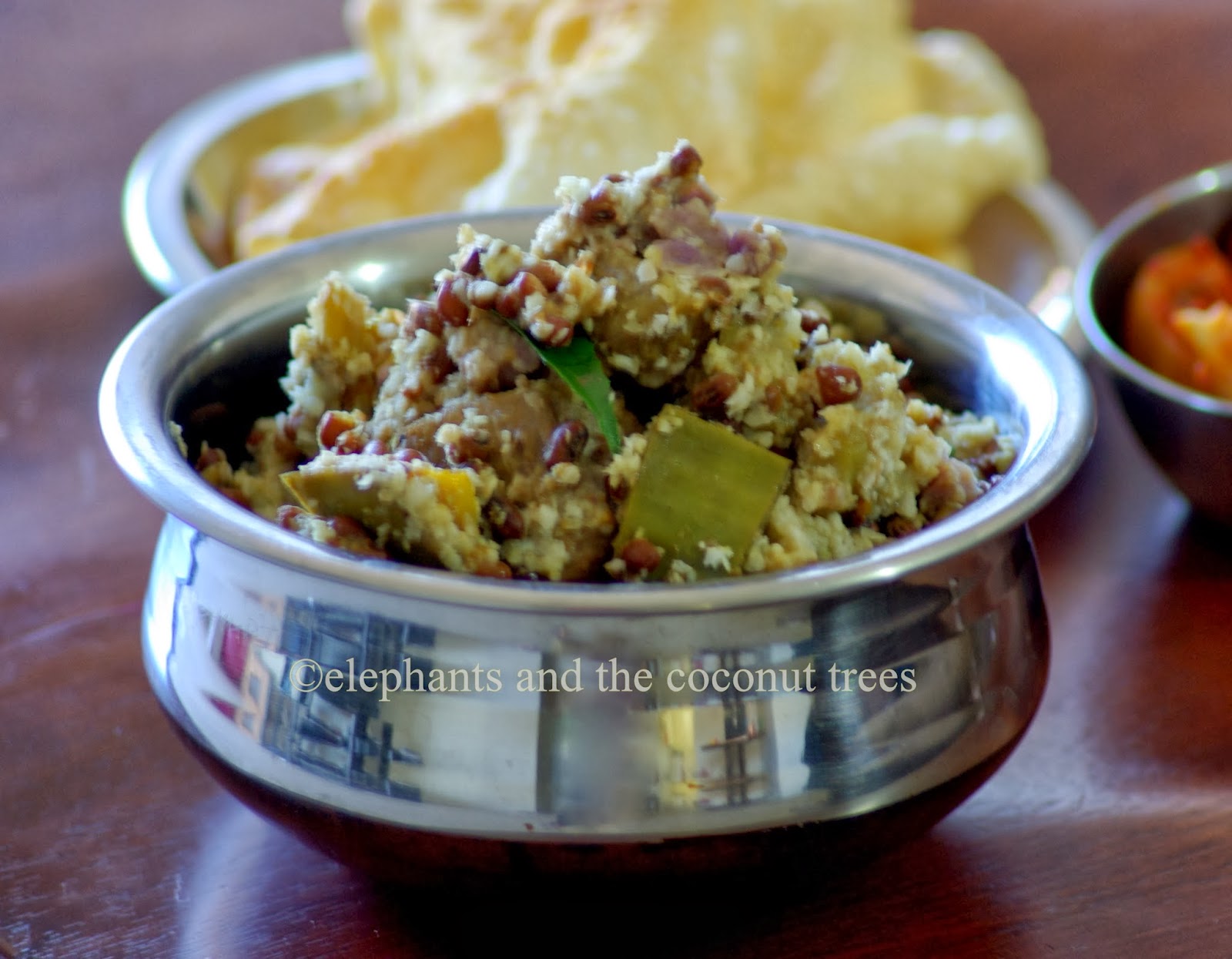 These pictures are from last year's yes, it is shaky,the steel is glaring, I had no idea how lighting was supposed to be then :)))

Hope u lovely people out there would give this recipe a try.
Meena

Sending this over to 'My Legume Love Affair' event hosted by Simona.