Chicken pot pie-An American comfort food.As I started making this often I understood why it is called so.It is almost a one pot  wonder  and a complete meal with vegetables, meat and bread. Ideal for serving on cold nights without too much slogging in the kitchen. 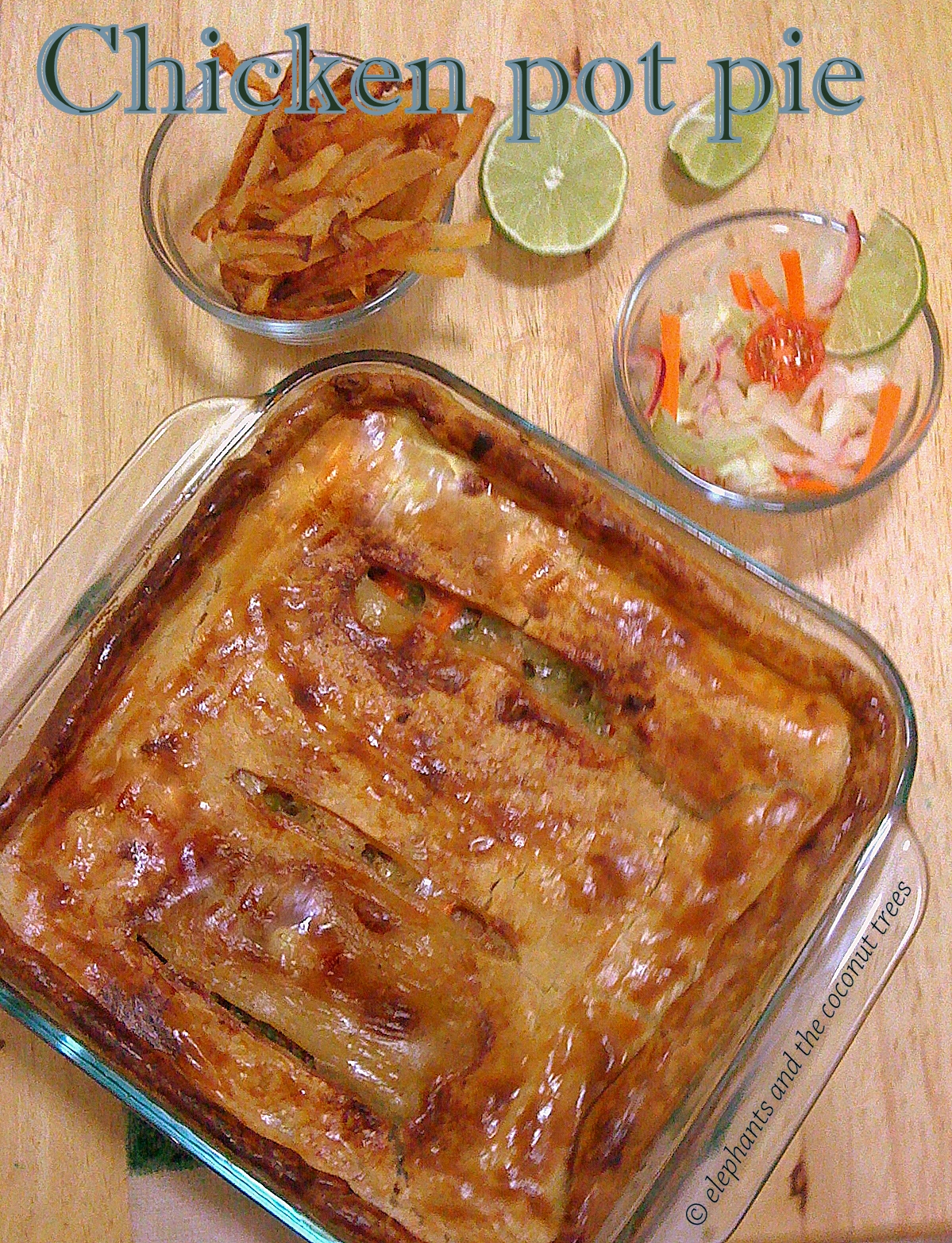 I can tell you it is a very satisfying meal.I love the crunchy top of it but the inside chicken is equally inviting which is tender and succulent in the creamy sauce of vegs.

Chicken- 8 pieces of thigh pieces(boneless & skinless- cut into small pieces about 1 inch)
Onion-1 chopped
Celery -1 stick chopped
Green peas- 1 cup
Carrot -2 cut into small cubes
Butter – 1 tbsp- or reduce if u like
All purpose flour- 1 tbsp
Whole Milk -1 glass / If u like it rich u can add cream instead
Parsley- a few chopped
thyme- a few chopped
Salt and pepper to taste
Pie crust- 1 (I use store bought)Thaw as per pack instruction and keep in the fridge till ready to be put on the pie.
Egg- 1 whisked (for sticking and egg wash)

1.Heat little oil in a large pot to that add chicken pieces and saute till it is nicely browned add the chopped vegs except peas add salt and pepper and cook till the veg is cooked takes about 8-10 minutes.
2.To it add butter and the flour and saute till the flour does not have a raw smell now add the chicken stock if u have or u can add water to the top of the vegs and chicken.Let it come to boil then cook for 15 minutes in medium heat.You will find that the sauce looks really thickened at this point add cream or whole milk give it a good stir then put the peas.
3.Let this cook for another 10 minutes so that the whole thing thickens to a very thick gravy add fresh parsley and thyme stir.Transfer into a greased glass baking dish .Now put the pie crust on top of the mixture and stick the edge of the pie crust to the dish by pressing it firmly .As u can see in the pic I did not want an overflowing crust so I tucked it inside of the dish.
You could use some egg whisked to stick the pie crust to the outer walls of the dish.
4.Just brush the top of the pie crush with egg so that it gets a nice brown color.Not too much to make it soggy.If the pie crust had no slits then put two slits so that the steam escapes.
5.Preheat oven to 400 F .Bake it for 20 -25 minutes till the top is golden brown.The inside will still be moist  with the thick gravy and the pie crust will be crisp. Cut it into huge portions and serve immediately.

You can use store bought puff pastry instead of pie crust if u want a flaky and puffed up pot pie crust.
You can make it in large soup bowls to serve as individual portions ,just cut the pie crust into rounds to suit the size of ur dish and every thing else is same. So u do not have the hassle of scooping out from one dish !!
I pressure cook the chicken until 3/4 th done then do all the rest as same so I get the fresh chicken stock from the cooker.(You don’t have to do it ,it is just for my notes I am jotting down:))
Need not have any side dishes but if you are adamant like me you can serve it with baked french fries and coleslaw 🙂
Do try it and let me know .
Meena
Share
Pin
Tweet
Share

Hey ! this is Meena. Welcome to my space.
My blog has become my medium of expression and a way of keeping me happy.
I started off as novice in cooking and over the years my husband has put up with all my disasters in such a gracious and enduring manner, I owe him a lot for that…